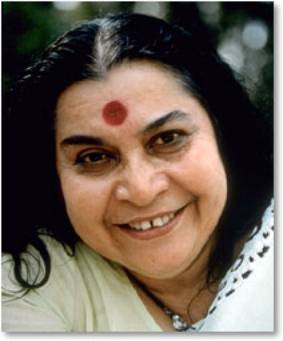 Shri Mataji Nirmala Devi was born on  21st March, 1923 at exactly 12.00 noon, on the day of equinox (when day and night are equal), at Chindwara (Madhya Pradesh), which is the center most place in the Indian map, to a Christian family. Her parents were Shri Prasad Rao Salve and Smt. Cornelia Salve of Jatav clan.

Her parents played a key role in India's Liberation Movement from under British rule. Her father, a close associate of Mahatma Gandhi, was a member of the Constituent Assembly of India and helped write free India's first constitution. He was a renowned scholar, master of 14 languages, and translated the Koran in Marathi. Her mother was the first woman in India to receive an Honors Degree in Mathematics. As a child, Shri Mataji lived with her parents in the ashram of Mahatma Gandhi. Shri Mataji's involvement in the freedom struggle is extremely remarkable.

Shri Mataji was born with a complete understanding of the human nervous system and its energetic counterparts. In order to become acquainted with the scientific vocabulary attached to these subjects, she studied medicine and psychology at the Christian Medical College in Lahore.

Shortly before India achieved independence she married Sir C.P. Srivastava, one of India's most dedicated civil servant officers, who was knighted by the Queen of England. Sir C.P. Srivastava held the post of the Joint Secretary to the Prime Minister's office of the late Shri Lal Bahadur Shastri in the years 1964-66. Afterwards he was elected for 16 consecutive years to be the Secretary General of the United Nations International Maritime Organization.

Amazingly, without any financial support from any person, Shri Mataji neither charges for Her lectures nor for Her ability to give Self Realisation, nor does one have to become a member of this organisation. She insists that you cannot pay for your enlightenment and to-date she continues to denounce the false, self-proclaimed "gurus" who are more interested in the seekers' purse than their spiritual ascent.

Large numbers of people, without distinction of race, religion, age or social status have acknowledged the value of her teachings by establishing Sahaja Yoga centers in over 88 nations. These people who live a normal family life, tap to their inner spiritual power through daily Sahaja Yoga meditation and have achieved a complete balance of their lives on the physical, emotional, mental and spiritual levels. They understand the integration of all religions and spiritual paths not at a mental level, but through their direct, tangible experience on the central nervous system.

Who is Shri Mataji?

Sometimes people ask and do not want to know. Sometimes people ask and do not want to believe. But if we ask because we are genuinely interested, and honest, then, only in meditation can we get close to the subject, in a living and experimental manner. All the rest is words, and words are just that ambivalent and unconvincing. Our advice, to those who would like to know the truth about Shri Mataji's unique and historical advent on this earth, is to experience Self Realisation through the proven technique of Sahaja Yoga and go deeper in meditation where responses unfold.